The win at Miami Gardens’ Hard Rock Stadium was the Chiefs’ first in 50 years and denied the 49ers the chance to win their sixth Super Bowl trophy and first since 1995. 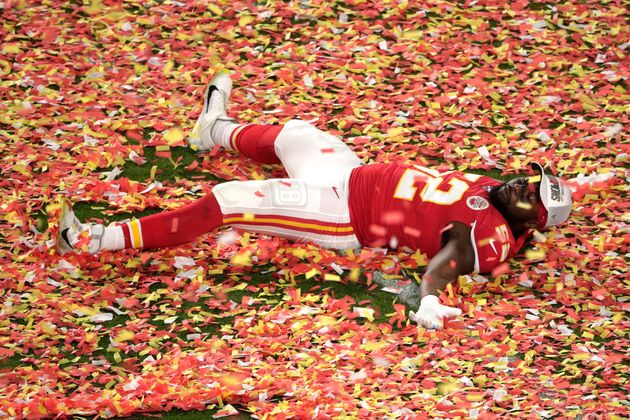 Kansas City Chiefs’ Demone Harris plays with the confetti at the end of the Super Bowl.

Momentum appeared to turn against the Chiefs after the team tied with the 49ers going into halftime. The 49ers pulled ahead by more than 10 points in the third quarter, but the Chiefs scored three touchdowns in the fourth quarter to win the game.

Quarterback Patrick Mahomes led Kansas City to the win in the final 6:13, and the Chiefs overcame a double-digit deficit for the third postseason game in a row.

The Chiefs (15-4) were playing in the championship game for the first time since 1970, when they won their only previous NFL title. Coach Andy Reid earned his 222nd career victory, and his first in a Super Bowl.

The Chiefs trailed 20-10 and faced a third and 15 when Mahomes threw deep to a wide-open Tyreek Hill for 44 yards. Kansas City scored a touchdown four plays later, and quickly forced a punt.

Mahomes then hit Sammy Watkins for 38 yards to set up a 5-yard scoring reception by Damien Williams that put Kansas City ahead 24-20 with 2:44 to go.

The 49ers reached midfield, but quarterback Jimmy Garoppolo was sacked by Frank Clark on fourth down. Williams’ 38-yard touchdown run was icing on the cake for Kansas City.

The 49ers (15-4) fell short in their bid for a record-tying sixth Super Bowl title, even though they dominated for 3 1/2 quarters. Garoppolo threw for 219 yards and kept the Chiefs’ defense guessing by completing passes to eight receivers.

Greece’s Olympic Committee announced Monday that no spectators will be allowed at the Tokyo 2020 Olympics torch lighting ceremony in ancient Olympia on Thursday due to the coronavirus outbreak. “The Olympic Flame Touch Ceremony will […]

Life in the NFL can be cruel. Dallas Cowboys kicker Brett Maher visited sick children with teammates at area hospitals on Monday, then returned to the team facility and was cut, the Dallas Morning News […]

MLB’s cheating scandal went into overdrive on Thursday as baseball Twitter blew up with a conspiracy theory that Houston Astros players wore electronic devices to tip them off to incoming pitches. The claim gained so […]